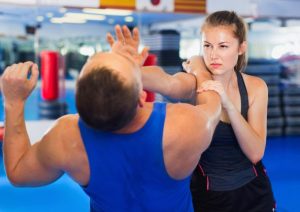 Self-defence courses: do they effectively exist? I don’t think so.

During a recent INpowered program, I told the group that self-defence courses you can believe in are like unicorns or pink elephants. You see them in movies and read about them in books, but they don’t exist.

One of the ladies looked at me defiantly and said, “Mark, unicorns do exist!” I conceded that they might, though I had never seen one. But effective self-defence courses definitely do not.

I went and googled self-defence moves the other day and got more than 1.4 million hits.

The internet is full of such “quick fix”, “instant ninja” and “only-self-defence-course-you-will-ever-need” nonsense.

Walk into any bookstore and go to the “self-defence” section and you will see hundreds of books filled with thousands of colour photos with numerous dangerous scenarios and how to DEFEND yourself in them. For example, when they say, “If someone grabs your right hand”, you’ll be prescribed a whole bunch of complicated and often confusing moves.

The problem with these internet moves and book scenarios is that they will never work UNLESS you practise them every day. Also, they have not taken into account that your attacker has not seen the clip or book and doesn’t know how he should stand to attack you, much less how he is meant to respond!

Defence moves need to be second nature to be effective. It is proven that to achieve any measure of proficiency with any real skill, you need to practise it correctly as many as 10,000 times.

You see, “self-defence” is reactive and a space reserved for the “Friss Chris Frikkie”. It involves thousands of well-practised moves against different targets from all sorts of positions and in a variety of scenarios. In short, you cannot learn to defend yourself with a single course or in a short space of time.

There are all sorts of fighting arts out there. Some have developed over hundreds of years as part of a fighting culture or subculture, while others come from the military, and others for sport and entertainment. Some are really good, some are total rubbish, but almost all of them have someone teaching a “self-defence” course using that particular approach and philosophy.

Having a black belt or a high grade does not qualify you to teach a self-defence course though.

Would you send a loved one to see a doctor who had done a “doctor’s course”? Of course not, which is why you shouldn’t go and do a self-defence course if you want to learn to defend yourself. As with the doctor, we are talking about your life! There is no room for error.

What you will need to do is find a reputable system with a qualified instructor where you will invest about four hours a week for the rest of your life in practising techniques and strengthening your body so that one day you might really know how to defend yourself. This is not something the average person has an appetite for.

During a self-defence course most instructors will fill the time with so much “stuff” to justify their existence and the price of the course and to prove to you how good they are. There are many exceptional martial artists who have really not given this “self-defence” course concept much thought and are really just looking to make money, or misunderstand the psychology behind the fighting art they have learnt over many years of practice. Their skills cannot be taught in any less time than it took them to master.

All they are doing is giving people a false sense of security, to make them think they can do something effective when they can’t. Teaching students to take guns and knives off people after only a few lessons is insane. It will probably just get the student killed.

There is no quick fix, no silver bullet, no short cut. There is no substitute for regular training if you want to learn to defend yourself. Why must I show you what I know if you are not going to do what I have done?

Recently I was made acutely aware of the realities of this, as we do a lot of work with schools throughout the country, often with life-changing feedback. I sent an email with references to the head of a well-known private school, requesting a meeting to present our offering. I was initially told they had a teacher on staff who had done a “self-defence” course, was an expert and did courses with the learners. I was then forwarded on to the head of extramural activities. Since when is a life skill this important nothing more than an extramural activity?

When you mention “self-defence course”, everyone has a perception of what it is. Most of us have done one at some stage in our life and yet remember very little, because, in reality, they effectively don’t exist …

Maybe one day we will see one of those elusive, magical unicorns, but until then, self-defence courses, as we know them, remain the stuff of fairy tales.

It’s not about “self-defence”. It’s about the choices you make!

Mark Grobbelaar is the Founder of INpowered, incorporating WIP (Woman INpowered) and GRIP (Guy Responsibly INpowered). He holds a 6th dan in karate and has over 45 years’ experience in the personal protection field. He does talks and hosts INpowered programmes to corporates, schools and small groups. Reach him with your question about personal protection at mark@inpowered.co.za

This site uses Akismet to reduce spam. Learn how your comment data is processed.

“From withIN” ….. BLOGS, VLOGS, RANTS, RAVES, INTERESTING STUFF AND OTHER AMAZING STORIES. Our thoughts ideas and interviews on a range of subjects that relate to personal protection From withIN expanding on INpowered rather than empowered, and that the power is INside you and that YOU are all you need to be INspired and INspirational and that anything is possible when you look IN.